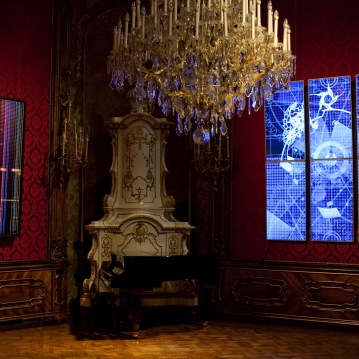 AROTIN & SERGHEI are researching and questioning the “Infinite” and the “surface of Illusion” of our Time.

Their main project  “Infinite Screen”  treats about exceeding the limits of our perception. The work in progress combines art, science and philosophy in a specific way. It is realised in different sizes, in different cultural context, each part in reference to a specific invention or reflection of our time. The first part – a commission by Klangforum Wien and Venice Biennial – is about the space behind the vanishing point, a homage to Mantegna and the invention of 3 dimensional painting in Renaissance. The second part is about the invisible part “of everything we see” . Elements of Ludwig Wittgenstein’s philosophy were translated into a 10m painting cycle, presented at Festival Ars Electronica.The next step “White Point” was about the alphabet of our time, the red green and blue light cells, forming each particle and pixel of all our digital information. This part was realised as  a cycle of intermedial paintings and later developed for Fondation Beyeler, with Scriabin’s Prometheus. In 2016 was developed an installation about endless construction and deconstruction processes.The artists  constructed 1200m2 radar into the future, inpired by the Babel Tower, on the main Facade of Kunsthistorisches Museum Vienna.

In the continuity of this total artwork, in 2017 AROTIN & SERGHEI created the “Infinite Time Machine” about the atomization of time. It is a eternal indestructible artwork, that combines art and innovation in a spectacular way: first time in the world it is an artwork without hardware and microchip. It is translated in a special blockchain codification transferred in digital canvases unique pieces. It combines art and innovation in a spectacular way:The vibrating heart of the installation pays homage to a overwhelming invention of our time. It is formed by artificially animated particles, images, drawings, sounds and models of the DR01, filmed by the artists duo through microscope in slow motion in the DR01 laboratory in Lausanne Switzerland.“Infinite Time Machine” is a unique digital creation, a composition that orchestrates 6 independent screens, in a total proportion 10:11, showing infinite combinations of basic 24000 frames, images and sounds. It is inspired by Giordano Bruno’s vision of parallel universes, as well as by quantum physics, questionings of the terms of infinity ourdays and the possibilty to open the surface of illusion of our time and space matrix toward future.

The endless metamorphosis of the image is formed by animated drawings, radars, mesurement tools and the filmed particles of the DR01 mechanism. A constant element is the vibration – a link between time, light, colour and sound and an artificial space breath / sound of Saturn / Kronos. Our Time Machine aims to quantifie time: It gives the impression to generate time by itself and invites the viewer for a journey, a free zoom of time perception in an endless unique moment.”

The DR01 Twelve First is not an ordinary timepiece: It has a movement that changes the way watches have kept time for more than 200 years – and a price of $ 1 million. In 2012 the watch’s creator Dominique Renaud invented a new movement with a vibrating, rather than oscillating, balance system that he says all but eliminates friction in timekeeping to increase efficiency, precision and power reserve. Then he placed the new movement in a clear angular housing much like NASA might have imagined, and announced he would make a limited edition of 12 pieces, each to be commissioned and personalized (…)It’s a totally innovative project that will bring fantastic progress and a new perspective to the entire Swiss watch industry. – It’s just the beginning of the journey. Everything is still to be reinvented.”

The endless development is created by animated drawings, radars, mesurement tools and the filmed particles of the DR01 mechanism. A constant element is the vibration – a link between time, light, colour and sound and an artificial space breath / sound of Saturn / Kronos. Our Time Machine aims to quantifie time: It gives the impression to generate time by itself and invites the viewer for a journey, a free zoom of time perception in an endless unique moment.”

The art installation was first shown together with the “DR01 take off“ at ESPACE MURAILLE Contemporary Art Gallery, Geneva in Nov 2017 on prototypes of Digital Canvases permitting for the first time digital unique pieces.
AROTIN & SERGHEI want to share the artistic process with the viewer and allows a glimpse into the fascinating world of creation. The duo curated therefore a cycle of concerts, presentations and talks, inside their exhibition “Metamorphosis” in the baroque halls of the W&K – Palais Schönborn-Batthyány: an artistic laboratory with renowned musicians and inventors deals with the question of the transformation and innovation of signs, sound, content and form in Art.
What relevance can measuring and timekeeping still occupy in our restless digital era? The omnipresence of the electronic devices has fundamentally changed both the perception and the handling of time.
As a third part of this cycle, AROTIN & SERGHEI invites the inventor Dominique Renaud and co-founder Luiggino Torrigiani to present their invention in the context of the artworks, followed by a talk and guided tour through the exhibtion.

The artwork of the future is for AROTIN & SERGHEI a composition of images, signs and ideas that involves the viewer in the dynamics of artistic research and creation. The interest lays not only in the addition of artistic disciplines in order to get a supreme effect that overwhelms the viewer in a finished work, but in a infinite splitting process of reflection and questioning that explores and deliberates the fascination of unknown space in between the known matrix of visual and acoustical signs, expressions and languages. Main topics of their work are the “surface of illusion”, the “error” as a creative space, the essence of images, of colour, light and sound, and the research of the impact of images in the context of artificial intelligence and media saturation.

“In our contemporary world, our media devices are constantly accelerating our communication, and perception, reducing in a certain way our impression of time and space. We are interested in creating artworks as objects of reflection, which suggest an augmentation of our vision, space and time. That is for us one of the main roles of art.” The artist duo’s main creation “Infinite Screen” was first realized as a commission by La Biennale di Venezia and Klangforum Wien. The project was then further developed for the Festival Ars Electronica, Fondation Beyeler and for Kunsthistorisches Museum Wien as a gigantic rotating installation on the Museum’s main facade.

After a break in Southern France, he returns with the creation of Dominique Renaud SA company, in order to revisit the fundamental principles of watchmaking and to open new paths for the industry. DR01 TWELVE FIRST – with a new mechanical heart and lost beat escapement – is not a watch, but rather a concentration of innovations and windows open to the renewal of mechanical watchmaking for the benefit of the entire watchmaking sector. «Dominique Renaud» is not a brand… but the signature of a watchmaking inventor and his team to develop and implement new solutions, initially tested in unique models, the TWELVE FIRST.

Luiggino Torriggiani, co-founder and partner of the DR01. Developing strategies for finding resources for innovative projects. Together with Bertrand Piccard, he was co-founder and manager of SOLAR IMPULSE in the start phase of the project. “My role is to be a “dreammaker” and to do everything to help inventors fulfil their dreams, to substantiate their projects and to give them the total freedom to express their genius. I like challenges, simplifying complexity, finding new marketing models and building bridges between different fields to find solutions and overcome problems.(…)

Nothing is impossible. As Albert Einstein said, imagination is greater than knowledge, but you have to dream and to dare to believe in your dreams. So let us dream and dare with passion, humility and determination. Innovation smiles on us. We can reinvent everything. Let us open new roads and get on board.”